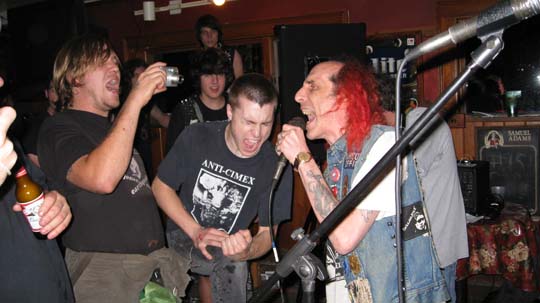 Punk rock has always been a genre of dichotomy. On one hand, working class folk trying to set things right; on the other, a bunch of bloody wankers. Like the Sex Pistols final UK concert: a 1977 Christmas day show for the children of local firemen, laid-off workers, and single parents that featured the consumption of 1000 bottles of soda pop. Pretty riotous stuff, that.

Such are Big Meat Hammer, a seemingly grimy lot, with a guitarist named Skummy Man, who are more than how they appear. Central is Jordan Kratz, over 40 and still sporting that leather jacket with the dangling chains, scraggly oft-died hair, and a grizzled set of pipes at the mic. His attic apartment is a punk rock shrine, covered with Misfits, GG Allin, Brood, and other punk fliers from the past 15 years. Martha Stewart would be frightened out of her wits.

But, off to one side, covered in protective plastic, is some serious stereo equipment, connected to Kratz’s computer. Kratz may be a punk from way back, but he’s also a computer geek — and that’s not a derogative term. Kratz had a web site for the Hammer as early as ’95, and was one of the first in Maine to introduce MP3s and streaming video to his site. But the punk comes out when you ask him how he got into it: “Because I like to do my own shit,” he says.

He certainly did his own shit on Big Meat Hammer’s debut disc, 10 years in the making, being released tonight [Thursday, March 22, 2001] with an in-store show at Bull Moose on Middle Street and a gig with Hate Crimes, the Marvels, and Swampwitch Revival at their old haunt, Geno’s. Please Keep Portland Clean is chock full of 28 tunes, some of which were recorded as far back as 1990.

“I took my time at it,” says Kratz, with a series of sessions at Frasier Jones’s Independent Audio out on Deerfield Road. “But it’s not like I was in there every night.” The result is a clean, thoughtful, straightforward disc reminiscent in its production values of Never Mind the Bollocks. “The sound is right up front,” says Kratz. “It sounds good.” That’s clear off the opening track, “Evolution Leap,” which leads with crisp Mark Peterson drums — no longer with the band — a blazing Skummy solo overtop Jim Rand’s rhythm, and indignant vocals from Kratz.

[Editor’s Note: This video is from 1998, three years before the album was released.]

The recording quality and the overall catchy quality of the tunes underscores yet another dichotomy Big Meat Hammer and the punk scene must contend with: This genre, founded as anti-establishment, just isn’t very scary anymore. People were wandering around the office recently humming the words to Big Meat Hammer’s cover of the GG Allin tune “Drink, Fight, and Fuck.” When you have Eminem gaining national fame rapping about raping his mother, that mantra seems pretty tame.

“When the Ramones hit,” says bassist and Portland punk historian Lenny Smith, “you had to twist people’s arms. Now everyone loves the Ramones.”

“Yeah, it takes more than punk to piss off your parents now,” says drummer and newest member Caleb Wilson. “You put on the Clash and they’re like, ‘Cool, the Clash.’ ”

“Now people listen to it for the poetry of it,” says Smith.

Things have also fractured quite a bit since the days of the 1980s when, as Skummy remembers, “you were either a punk or a new-waver.”

“In the old days, it was just punk,” says Smith, “now there’s just too many choices.” And when a punk show does come together, Smith sees the day-long, 10-band extravaganzas as counter-productive. “People go for an hour to see one of the bands and then split. Who wants to sit there for a whole day of pot-luck bands?”

Luckily, there’s always Geno’s, which, in 18 years, has yet to get stale. “There’s enough different types of bands that I don’t feel like it’s the same thing all the time,” says Smith. “Bars close down and then another opens up. Clubs change. I like that Geno’s has had that longevity.” And Kratz may have put his finger on the reason for their success.

“A lot of acts have played there because Geno is their friend,” he says. “He stays open, he pays you out of his pocket if he has to, and he allows nearly everyone to play.”

Every scene needs a club like Geno’s to keep it alive, even punkers, famous for relying on no one. “That’s the downside to DIY,” notes Skummy, “you have to do it yourself. We don’t know how to do it ourselves, we’re just punk rockers.”

There’s also a downside to being a veteran statesman of the punk rock scene. “Twenty years ago,” says Smith, “we could have jumped in a car and drove off across the country,” to support the new disc. “But I was 30 when I joined the band. It’s not as easy to drop your job and go. Maybe that’s an excuse, but it feels harder.”