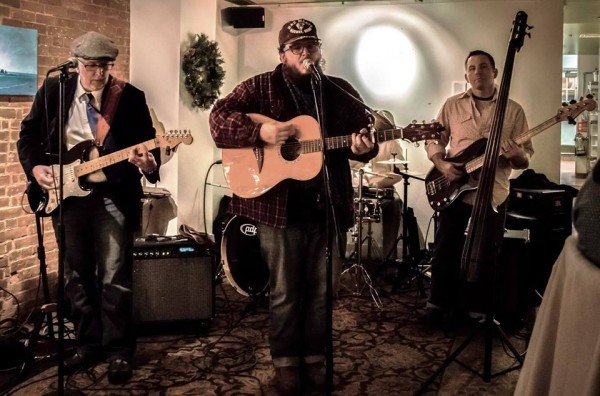 One man’s Daydreams are another’s nightmares

What is it about a sad song? The catharsis of a good lament can be so sweet, built doubly on empathy and a sense that, well, maybe things aren’t as bad as all that.

With Gunther Brown’s debut full-length, frontman Pete Dubuc and crew have created the most sorrowful local record since Ray Lamontagne’s Till the Sun Turned Black. Like that album, Good Nights for Daydreams is full to the brim with regret, promises that are likely never to come to pass, and good, old-fashioned wallowing.

From the opening “No Use Livin’,” the sunshine can be hard to find, other than some splashes of cowbell from drummer Derek Mills. What’s more sad-sack than this? “This is the night I give up my life/ When you dig my grave/ Don’t pray my soul to save/ Just cover me with earth and go.” Hallee and Kati Pottle supply high-low backing vocals to put an even finer point on it, a sharp complement to Dubuc’s quiet rasp.

The following “Time and Again” takes the pace down and layers on the tears in your beer while recalling Wes Hartley’s excellent “Acreless.” As elsewhere, the heartache comes from separation: “Lay your head on the table/ Cuz this is goodbye.” Chris Plumstead’s electric-guitar break in the bridge is more lighthearted than you’d expect, though, and doesn’t quite match Dubuc’s emotion.

Elsewhere, Plumstead flashes some Allmans/Dickie Betts influence, as on the brief solo with 30 seconds to go in “The Next Time,” an up-tempo alt-country tune. The early-song fills are where Plumstead shines, setting up what ought to be great live, where “you ain’t gonna get away” is more of a promise than a threat and there is real urgency.

Except that gal seems to keep finding a way to be somewhere else, even if on “Follow You Anywhere” Dubuc makes the same promise: “I will not let you go.” This time the urgency is communicated via increasing tension. It’s moody, with lots of high hat, and boozy like an after-hours song played to a few stragglers and the bartenders counting out the drawer. Just try to enjoy the moment: “We’ve no past, no future that will last/ There’s just now.”

It’s that resignation that fuels “Forever,” an upbeat strum that’s angry and resentful, calling to mind an ex crashing a wedding he wishes was his. Like the Old 97s or the Weakerthans, Gunther Brown can lay on the biting spite pretty thick. “People keep coming around and telling me,” Dubuc sings, in a way that makes it clear he wishes they wouldn’t, “things they think I oughta hear.” And when he talks about looking back 13 years, it’s clear he’s old enough where 13 years just isn’t that long anymore.

Then the bridge goes into half-time for a bluesy Plumstead solo. It’s a touch of prog you find again in the closing tune, the six-minute “Up To Me,” built on contrasting rhythms from Mills: quick with the sticks, plodding with his feet. Here, we get to the heart of the matter: “You don’t love me anymore.” Again, it feels more like a promise than an accusation.

The overall feeling here isn’t sad, or miserable, but accepting. Resigned. There is an embracing of the pure emotion, odes to that cliche that it is better to have loved and lost than never to have loved at all. There is determination, too, and ambition. Songs like “Christ of the American Road,” “Headlights and Highways,” and “Bobby Orr” (the last reminiscent of early REM in its mix of sing-song and deadpan delivery) speak of a mission. Our protagonist is on the way back to redemption. There is hope and there are big dreams.

If you set your sights on “skating circles around Bobby Orr,” coming up short, simply finding a person to live with, doesn’t seem so hard now does it? Despite all those “broken things on the side of the road” you leave behind along the way.