In the deep house

Slowing room pick it up a notch

Ah, to be an electronica band in Portland. The adoring fans (scantily) dressed in their lamé. The packed houses of booty-shaking good times and swirling lights. The . . . okay, you get the boringly sarcastic point. Frankly, that doesn’t sound like Portland at all. In fact, other than the walk-in-closet Mercury, and maybe a night or two at Asylum, electronic music doesn’t have much of a venue ’round these parts [May, 2002 … not much has changed].

“We don’t really know where to play,” admits Jason Hjort, principal songwriter for Slowing Room, a trio that never met a sequencer or sampler they didn’t love. Lately, they’ve solved the problem of venue by just playing wherever will give them a stage. If that means a different sound for the Free Street Taverna — whose patrons generally take more kindly to strings than springs — so be it.

Though last Wednesday’s gig was “the first time I’ve ever been heckled,” reports Slowing Room’s multi-instrumentalist (bass, keys, even trumpet and vibraphone) Chris Burns, formerly of Satellite Lot. Seems one of the regulars didn’t take to Burns’s opening set, which was played mostly on his laptop. 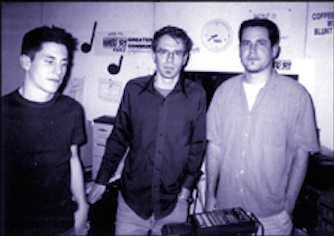 “He actually went over and turned on the juke box,” says Hjort.

“But I had more wattage behind me,” says Burns, “and I just kept right on playing.”

It’s hard to imagine such an adverse reaction to the crisp chill-out, house, and trip-hop these three put together. Though much of the music is sequenced and pre-programmed, Slowing Room distinguish themselves from the club DJ set by making electronica that can be performed live. Eric St. Pierre’s alternatingly driving and soothing beats on the live kit are augmented by a drum track of subtle bass played through the PA. Hjort’s guitar moves around chords designated by keyboard sequences. Burns’s bass needn’t provide the foundation of the song, as that task can be automated beforehand.

You wind up with the fact that, “We’re a closet jam band,” says Burns. “We take a root riff and then never play it the same way twice.” Ten years ago, that would have made them a rarity, as electronic music was largely made by button-pushing studio wizards. But bands like the New Deal (a Canadian outfit using electronics to augment their unabashedly jam sound) and Basement Jaxx (currently the darlings of the outdoor festival circuit) have made performing electronic music fairly common these days. Even locally, spark have gathered a following at the Mercury with live performances of generally digital sounds, and bands as diverse as Vespertine, audioblacK, and the newly-formed Conifer may not be electronica, but they use samples and sequences to augment their sound.

It’s a long way from the rock bands (like Swaylude) that St. Pierre and Hjort started during their first stint in the Portland music scene throughout the mid- to late-’90s. Then St. Pierre moved to Florida, and Hjort joined him a year later. “We both started getting into electronic music,” says Hjort, “but that’s more like DJ music. We said to ourselves, ‘This is the music we love, so how do we do it live?’ “

“We had no idea how to program synths or anything,” says Hjort, but, starting with a set of Roland V-drums (basically a digital drum set with realistic resistance), Slowing Room began building soundscapes that they accurately describe as “soundtracks for the film in your head.”

However, their live show still left something to be desired. With no live bass player, there wasn’t room for the improvisational element to which their jazz backgrounds spoke. Luckily, just a short while after Hjort and St. Pierre moved back to Portland last year, Chris Burns was looking for something a little less rigid than what was going on in Satellite Lot.

“It’s just better,” says Hjort of the music they’ve been making since November with the new addition. Burns has brought a feel for chord progressions to the songwriting, along with more upbeat disco riffs that have taken the band from the slower down-beat, chill-out sound (think: sitting on the couch smoking lots of dope) to more club-friendly house sounds (think: that booty-shaking I was talking about earlier).

Though they don’t have a release that reflects this new progression, their offerings on mp3.com (they’re well over 30,000 downloads) are still delectable. “Wednesday’s Bus” captures the essence of the fifth-grade bus stop: anticipation hangs with the slightly atmospheric drum beat, a vocal snippet lends an air of confusion, piano melody underscores the innocence of the soaring synthed strings. “I Think You Know” is as accusatory as the title suggests. It’s faster paced, heavy on the reverb, with a sound like a demented telephone ringing in threes. Just as that’s about to put you over the edge there’s a reprieve — as if to suggest Significant Other says: “I know you didn’t mean it” — with strings, a woman’s voice, a Spanish beat, and something that sounds like the interludes on Tribe Called Quest’s Midnight Marauders. But then there’s that phone again.

Maybe it’s more like an alarm clock, trying desperately to wake Portland to the wonders of a great backbeat. Plans are even in the works for indie filmmakers to provide a visual backdrop to their set. St. Pierre thinks that might solve the “problem” of their lack of audience focal point by way of a lead singer: “That’s why it’s important to have visuals — people won’t have to look at us.”