The once and future Seekonk

Seekonk’s web site has been abandoned and is now a home for spam. They haven’t played a show this year [this was originally written in 2008]. Northeast Indie, the label that in 2005 put out the band’s last album, Pinkwood, has also lost its internet presence and is no longer an active label (though I bet Paul Agnew still has a few discs available for sale should you want to track him down).

Heck, the Seekonk album Burst & Bloom released this week, Pinkwood 2, was originally released two years ago and was in the can a year before that.

Why should anyone care? 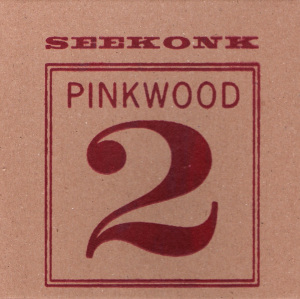 Maybe we’re not collectively that cynical yet. As artistically satisfying as it was for Seekonk to release Pinkwood 2 originally as a limited run of 100 pieces of vinyl, they really were depriving the larger populace of a fairly grand musical experience. Now, thanks to Burst & Bloom (it’s a limited run of 100 CDs this time around, but they’ll make more if you buy them, I’m fairly certain), there’s a whole new opportunity to experience a gifted band at the height of their powers.

Described often as slo-core, or even orchestral indie, it’s true they share an aesthetic with Low or Mazzy Star at times, but even if this band were doing nothing but covers, I suspect they’d be worth listening to. Each note is so carefully chosen, placed, and positioned. Seekonk offer such a whole and inclusive world in which to reside. Their sound fits effortlessly into that sweet spot of familiar and brand-new.

Is it the pacing that makes a Seekonk song? No. “For a Reason,” with a digital effect like a UFO landing and taking off, is downright manic in its beat, with xylophone like drops of water off the trees onto the roof an hour after the thunderstorm ended. By the finish it’s a straight-up head-nodder.

Seekonk are more than a quiet band to get moody to.

Perhaps what they do best is challenge expectations. They open Pinkwood 2 with “The Rage,” a song that ironically begins lushly and gently, with pinging xylophone and Sarah Ramey’s breathy vocals assuring, “it’s nice to meet you.”

You find the rage, but only if you keep looking. What is rage when you don’t seem to know what aggression is?

Maybe it’s in the digital whirring that purposely mars the pop sensibility with a touch of discord, just as the band throw in sour notes as though to keep things from getting too pretty. “Take the records off the shelf,” Ramey implores, “throw them away.” Only a band this confident would bring in this late-song electric guitar riff, before quickly taking it away.

There are bands that would craft whole songs from that riff. For Seekonk, it’s a passing fancy, the type of thing Pat Corrigan or Todd Hutchisen seem to effortlessly dream up.

“Half Moon,” a good stand in for the essence of Seekonk, is methodical without being plodding, delicate and serene. To the fore is an acoustic guitar strum, a keyboard mirroring the vocal melody, but there’s a sheen of feedback and screeching that’s just out of earshot, as though there were traffic in the background as you listened to the song on the bus with your earphones in.

Around the four-minute mark the drums enter and add a sense of urgency, ramping the song up into a full-blown indie rock tune, crashing about and active like the Walkmen (whose new Lisbon is a kissing cousin to this disc in many ways).

They can strut and bounce, too. The vibraphone and brushes on the snare in “38. Special” amble and shuffle, while the lyrics and delivery suggest something darker. This song, more than any of the eight here, make you wonder what would happen if the band took the governor off.

Not that they’re the type of band to be constrained by genre. They move, in “Breakfast at Noon” and later in “Hills of Pennsylvania,” toward an alt-country vibe, mixing in pedal steel and a twang you can feel in your gut. In “Noon,” Jason Ingalls’ crisp snare is mixed perfectly by Jonathan Wyman, a support structure for Ramey’s best vocals of the disc, rising for once into full body at the 3:30 mark.

But Seekonk won’t be predictable or easy. The shuffling Texas beat of “Hills,” heavy in low-end guitar, with competing melody lines, shifts suddenly to a Latin beat, active, which itself is in contrast to the hovering vocals, which never sound less than half asleep.

That’s part of their sound, of course, but I do find myself wishing Ramey would finish off a few more lyrics, instead of living on initial consonant and vowel sounds. A few glottal stops here and there and I might catch a bit more meaning.

This isn’t a lyrics band, though, and Ramey’s voice is as much a part of the instrumental construction as it is a mode of meaning delivery. In the crisp “Waking,” a gorgeous construction of delicate guitar and xylophone, she repeats “right about now” until it’s poppy and uplifting, before backwards-played mutterings enter to haunt the song’s finish.

That nagging sense of doubt is the album’s heart. It is the conscience we battle to both ignore and satisfy, the ugliness we seek to dispel but can’t live without.

All roads lead back to Ray LaMontagne

Ray LaMontagne is a pretty funny guy. But it’s a subtle humor. Take the 2003 show at the Center for Cultural Exchange (may it RIP), where he gave the crowd a big explanation about how he was working on a tune for Sesame Street.

Would we like to hear it? God, yes, the 75 people in attendance implored. Already he could do virtually no wrong. So, he started to play, reading the lyrics from a legal pad next to him.

If we were eating out of his hand after a song or two, at this point we probably would have donated to his kids’ college fund.

Which is what LaMontagne’s well on his way to making an afterthought as he releases his second RCA album, following sales of 300,000 copies of his Trouble and more than two straight years of touring the world. Nose to the grindstone, he’s thousands of miles from his wife and family as he tries to make his nut.

If only, after hearing Till the Sun Turns Black, it didn’t seem so much like he hated his fucking job.

A brilliant and moving disc, this new album is charged with a pathos that can’t be an act. LaMontagne is an old soul ill-fit for our modern world, just a few years removed from living off the grid, when the demands of touring forced his family to move closer to society and things like cable television. Planes, security, Guster’s hippy fans, Japanese society—these are the things that leave LaMontagne wondering: “Will I always feel this way / So empty and so estranged?”

That’s the chorus from “Empty,” the album’s second track and a wonderfully shuffling sad cowboy tune (and the only previously released track, having shown up on last year’s Live From Bonnaroo EP). A cello and violin open (there are strings on most every song here, thanks to the production of LaMontagne’s right-hand man, Ethan Johns), then come in a perfectly paired rhythm section of brushed drums and walking stand-up bass. The lyrics are the kind of writing that has made LaMontagne a star, paired with his delivery, an aching exhalation like he’s ripping his chest open in front of you. It feels like gospel, and I don’t mean the musical genre: “I looked my demons in the eyes, said do your best, destroy me / I’ve been to hell and back so many times I must admit you kind of bore me / There’s a lot of ways to kill a man / There’s a lot of ways to die … There’s a lot of things I don’t understand / Why so many people lie.”

Is he a folk-slinging Cobain? Destined to only get more depressed and disappointed by the prospect of getting everything he every wanted?

With LaMontagne, it’s a lot simpler than the pressures of oncoming fame. Rather, I think he’s just homesick, writing songs on the road that come from emotions that would exist even if every flight was first class and every security check came with a red carpet.

The album’s single, “Three More Days,” couldn’t be simpler. The only real rocker here, it’s a Motown send-up, late-career Ray Charles (his namesake), full of big horns putting LaMontagne forward as bandleader and Southern rock guitar that should remind you of last album’s “How Come.”

And the sentiment is just as simple. “Three more days, girl you know I’ll be comin’ home to you darlin,’” LaMontagne emotes at his most impassioned. He’s contrite – “I know it’s wrong to be so far from home” – but he’s practical: “I just gotta get this good job done / So I can bring it on home to you.”

Elsewhere, things are not so cut and dry. The production, Johns playing many of the instruments, often seems unnecessary, like the music that intrudes into movies, telling you how you’re supposed to feel when it ought to be obvious. “Can I Stay,” with a bit of demo-like hiss, is heartbreaking on its own, LaMontange imploring, “Can I stay here with you till the morning / There’s nothing I’d like more than to wake up on your floor.” But his naked emotion is dressed up in descending string progressions.

Similarly, the ukelele (or some other odd-sounding deviation on a guitar) in “Gone Away From Me” makes what could be a distinctive rhythm sound exactly like Hans Zimmer’s instrumental theme to True Romance (full disclosure: My wife called that).

It’s hard not to wonder whether Johns hasn’t become more LaMontagne band member than producer, in a way forsaking the producer’s role of making hard decisions about when too much is just too much. Ray’s a charismatic guy. He wouldn’t be the first to try to make him happy.

Can that be done? You wouldn’t know it from LaMontagne’s first two albums. And though I’m not here to say it’s his job to blow sunshine up your ass, it’s hard not to feel like this album is, yes, blacker than the first. Trouble’s “Hannah,” “Jolene,” and “Shelter” somehow had a hope that’s largely missing here. The title track alone, where LaMontagne picks apart our social structure and finds even the wise man’s lot ultimately hopeless, should be enough to get you reaching for the whiskey.

Still, there is the album’s finisher, “Within You,” that acts as an uplifting coda in the way that “Her Majesty” rejects the irony and bombast of Abbey Road. Built on a gentle strum, with a tambourine for rhythm, LaMontange meditates on a single couplet for about five minutes. “War is not the answer,” he breathes, his vocals as high as Iron & Wine, “The answer is within you.”

Is this politics, or is this a simple acknowledgement that sometimes you just have to take life as it comes? Well, as Wilco sang, when “it’s a war on war / You’re gonna lose.” And I think LaMontagne would agree that “you have to learn how to die.”