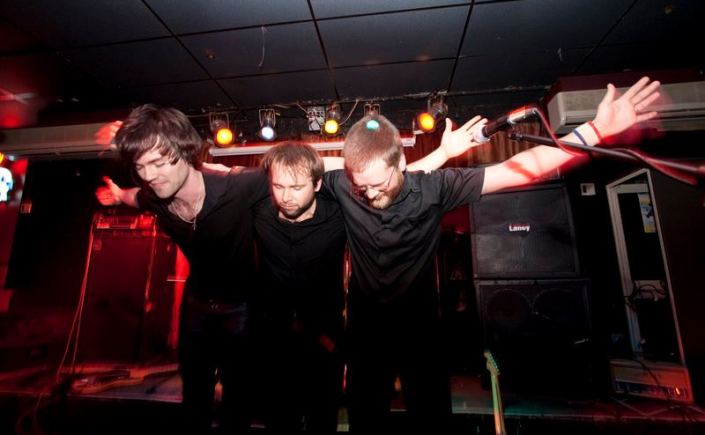 A live album for a dead rock singer from Kino Proby

The quick back-story on Kino Proby: Three Mainers take a liking to the Russian band Kino, and its legendary lead singer Viktor Tsoi, who died in a car wreck in 1990 after becoming maybe the single most famous Russian rock star (which isn’t saying a whole lot, admittedly, but the guy could definitely rock out and dying early generally helps your rock fame). They put together a tribute band (Kino Proby is Russian for something like “a sampling of Kino,” and Kino, itself, means “film/movies/cinema”) and not only acquired a considerable following playing gigs in the Old Port, but eventually even played in Tsoi’s hometown of St. Petersburg. 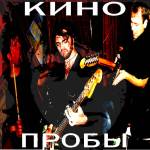 Now, they’re scattered about and only get together for a show or two each year. This Friday [January, 2011] they play the Port City Music Hall, in fact, and at the same time release an album called Live at the Big Easy.

Yes, they sing all of their songs in Russian. It’s the first rock/indie rock record released in Portland sung all in a foreign language that I can remember since Jose Ayerve’s Cinco Pesos, released in 2002. Perhaps more impressive, a solid portion of the crowd on the live disc can be heard to sing along in Russian.

And the songs do lend themselves to singalongs. While there may be a perception (perhaps lent by the stateside success of Gorky Park and their hair metal hit “Bang”) that Russian rock is mostly ’80s glam, Kino Proby do great justice to Tsoi’s talents as a songwriter, on the live album churning out some fun pop rock. “Cuckoo” (and please keep in mind that I’m translating Russian titles using my college Russian minor and a dictionary) wouldn’t be out of place in a Phantom Buffalo set, opening with a set of “la-la-la” and featuring a languid downtempo chorus. “Trolley Bus” is classic white-man’s reggae, more Clash than Police, with a throaty and insistent chorus. “Blood Type,” the title song from Kino’s 1988 album, the first to gain international traction, features an homage to Duran Duran’s guitar tone, like, say, what Andy Taylor was rocking on Seven and the Ragged Tiger.

“A Star Called the Sun” gets the best crowd reaction, with a noticeable perk in attention when Jarlath McGuckin (Viktor I) gets to the Russian word for “sun,” “solntsa.” Moving from an opening verse with just bare guitar chords and a bit of high hat, the song fills out into a pop jam, like a quickened waltz with a catchy repeating riff. And when they finish, they transition smoothly into “Cuckoo,” as they do a number of times during the set, borrowing some jam band live tendencies, as they do again when they stretch their encore out past 12 minutes.

Considering they’ve only got three pieces going, that’s tough work. Really, they do the three-piece thing at least as well locally as Loverless, whom they thank during one song break, Paranoid Social Club, or Sidecar Radio. Adam Kurtz (Viktor II), who’s shown before he can shred with imaginary bands, does yeoman’s work holding the melodies together, while Jess Greer (Viktor III – apparently the rest of Kino’s band members don’t do much for Kino Proby – it’s all about Viktor) keeps them tight and focused.

In fact, you get quite familiar with Greer’s drums and McGuckin’s bass as the mix on the album is pretty heavy on the rhythm section. It sounds as though the recording is taken from the crowd and not through the mixing board, so the vocals can be muted and hard to catch at times. And, yes, I understand that none of you will be able to understand the lyrics. Plus, the crowd can be a bit much — not quite big enough sounding to be impressive, just enough over-exuberant at times to make you wonder if there’s a heavy concentration of girlfriends and school buddies.

Most of the time, though, the performance is good enough to get you past any sonic foibles. “Aluminum Cucumbers” (it’s hard to say that translation is solid – I may be missing a word in my dictionary) has a great cowpunk vibe, old-time rock like Chuck Berry, and as sunshiney as anything the Leftovers do. “Me and You” is vampy and dark, with swaggering strut in the bassline, completed by the guitar, something like the clipped keyboard sounds you heard so much of in the ’80s. “Close the Door Behind Me, I’m Leaving” opens with huge guitar riffage, upbeat and forceful without getting metal, and moves into a raging jam that still manages to convey a world-weariness.

Maybe the worst thing about this album is that it makes me feel like a dink for not being way more into this band when they were playing out more regularly five years ago or so [now 13 years ago or so; I still feel this way]. Their schtick never gets old during a long set, they execute the songs very well, and the band they’re paying tribute to still has something to offer the contemporary listener. 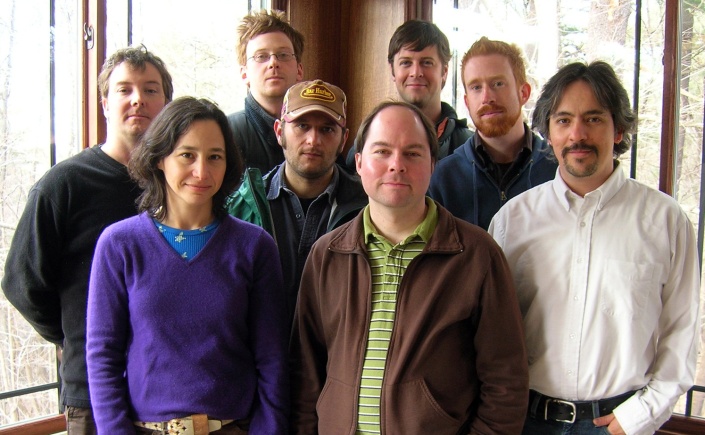 Spouse give you a shoulder to cry on

Spouse, those impetuous Bowdoin grads, are like Portland’s indie-rock house band. Except that they never play around here anymore [this is 2002]. It seems that the end of their college careers careened them off to the far corners of the country, landing them in far-away cities, with real-life jobs. Luckily, the musical anchor that is Jose Ayerve — the group’s frontman and soul — can’t pry himself from Portland’s friendly confines and we get to call the band our own. They are a talent worthy of covetousness.

Their new disc, Love Can’t Save This Love, repays us grandly for our devotion with an opening track that doubles as a joke and backwards glance. “Whatever Happened to Pete Shelley?” the song’s title, might be answered by the Buzzcocks’ Shelley with, “Who the fuck are Spouse?” It stands as indie-rock self-mockery by a bunch of kids fascinated with the music scene and its sometimes evil permutations. Shelley’s recently re-released solo album Homosapien, was one of the first efforts to bring cred to synth pop, but was generally ignored by the record-buying public. So, it didn’t come as any real surprise when The Best of Pete Shelley was released in November 2001 — but only in Japan.

So, too, Spouse’s debut full-length, 2000’s Nozomi, was described by more than one critic as a melodic, lyrically inspired masterpiece, but “Pete Shelley” implicitly asks: What good did it do them? “Where’d you go? Where’d you go? When you left here we don’t know? Were you running after someone you could have done without?” When the song finishes out with a round of vocals echoing and preceding one another, the swirling confusion rings genuine.

And it doesn’t get happier.

“Pocket #9” starts out as a downbeat, Lynchian dirge. “You work too hard getting around, getting over it,” Ayerve sings with back-of-the-throat breathiness. But, then, somehow, the band does collectively get over it. The song breaks like clouds dissipating, with a lo-fi bridge, a ringing lead from Naomi Hamby, and light keyboard strokes from Liz Bustamante. Mike Merenda’s drums pound in as if to shake off the cobwebs, and the album begins in earnest.

As musicians whose formative years were informed by the Pet Shop Boys, Erasure, Bret Easton Ellis novels, and Sixteen Candles, Spouse are masters of making self-loathing and suburban angst entertaining as hell. “Chiffon” is a punkish take on Big Country, where they threaten that they “Can’t keep being the object of your limited affection/ While you strive to reach perfection/ Like you’ve never reached before.” It’s both a missive from a spiteful band and an anthem for that famous ’80s latchkey kid, wishing mom and dad took a little more time off from their jobs.

“LA Tool & Die,” is an indie Depeche Mode self examiner, where “Here I am clinging to another cigarette” is all you need to know while Merenda knocks his kit around like Stewart Copeland, riding cymbals and bells, throwing percussion to the melodic wind.

But the Less than Zero “Sad, Not Trashed” is the album’s angst-ridden masterpiece. As plinking guitar harmonics lend a melancholy feel, the tone is sad and lilting, but not angry. It’s the suburban dissatisfaction that delights in resignation and leftist politics — a musical antithesis to the new anger rock of Korn and Slipknot that caters to a generation of kids who can (horribly) identify with domestic abuse, incest, and the like.

No, back in the flush ’80s, it was enough that Dad never came home, that Mom was always drunk, and that your boyfriend was never as deep and thoughtful as Andrew McCarthy. Talk about emotional inspection: “Every angle in the mirror’s a reflection of the Clock/ When we finally got our courage up we were both too fucked to talk/ I hope you’re making it alright/ I hope you’re taking it so hard/ I hope you’re thinking on your feet/ I hope you feel it all the time.”

Then, the lovely chorus: “We’re so sad when we’re not trashed.” Beautifully pathetic, right? The ascending levels of self pity gather and crash down in melancholy melody. “We share a smoke/ our dreams all dashed.” But the great thing is that they’re not asking you to care. They’re happy being sad. That’s their shtick. They know it. And when the resounding, uplifting “La, la, la (lots of las)” bridge breaks in, the urge to sing along at the top of your lungs, to identify with the self-loathing and revel in it, is undeniable.

When the song fades out, percussion mimicking both camera shutters and “Girls on Film,” the irony is palatable. These guys don’t want to be rocks stars. What would they have to be sad about? A song titled “Whatever Happened to Spouse?” may be all they aspire to.