Shine on, you crazy rapper

The debut full-length from Shane Reis

Maybe you heard about Martin Manley. A long-time Kansas City sportswriter, he made the extraordinary decision to plan his own suicide 14 months in advance, all the while documenting his life on a web site that went live on the occasion of his death.

It’s interesting that he would at the same time wish to die and effectively live on forever in the annals of the Web, his every interest and familial detail articulated. He was at once documentarian and the guy who shuts off the lights at the end of the show. 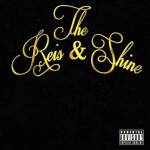 There’s something similar going on in hip hop these days, as rappers increasingly create albums that document their interior monologue, hyper-personal introspections over R&B samples and bouncy snares. Further, there are often assurances that said rapper won’t forget his/her upbringing when the big-time hits, that the fire that forged the rapper in question is vital to the forward trajectory of the big hip-hop career and the music, itself.

In other words, you can’t know their music without knowing them.

Shane Reis goes so far as to ponder “what woulda happened if I had died this weekend” late in his debut full-length, Reis & Shine, a 17-track collection of indie-pop contemporary rap, with familiar nods to the soul and funk traditions. On “If Tomorrow Never Comes,” Kristina Kentigian, quickly becoming a studio pro’s pro and piling up credits on local albums (the hip-hop equivalent to a horn section with Ryan Zoidis and Dave Noyes), croons behind the first couple verses, then knocks out a beautifully executed sung verse of her own.

Like Manley and his web site, Reis declares his intentions bluntly, in a cadence like a more-deliberate Bread. “I got a lotta shit to say,” he informs us early on the title and opening track, keeping us up to speed on everything from his age (23) to his foibles: “Hear the people whispering, say I don’t belong.”

It’s not this reviewer’s place to psychoanalyze, but there’s certainly no shortage of fodder here for anyone who might like to take a swing. It’s like he’s lying on the couch laying himself bare.

Heck, in “Human Nature” we get the entire thought process behind whether he should be jealous of his significant other or not. Through one of the more progressive tracks, with back-step beats and an off-time piano cadence, he details the real reason why she decided to put her ring in her purse when out at the club: She didn’t want to lose it like he had done.

Maybe it will strike you as too intimate. Maybe you’ll relate.

The album as a whole is in some ways like De La Soul’s Plug 1 & Plug 2, which is more throwback-‘90s, but similarly delivers a consistent style of hip hop with every track, rather than mixing ballads and bangers or changing up vocal deliveries for effect. You might not have all the songs committed to memory, but every track is very listenable.

Nor do the guest spots by talented MCs like Spose, Lady Essence, Jay Caron and Syn the Shaman overpower their tracks. They mold their flows to Reis’ like a tasteful lead guitar solo.

Essence’s contribution to “Can Your Remember” is particularly sweet (as in: aw shucks), dueting with Reis on a chanted chorus that’s playful and catchy in rap harmony and then giving her side of her friendship with Reis, how the two of them related with their parents and the outside world when Eminem and others infected them while growing up with the need to MC.

Her mother read her rhymes and pronounced, “You need therapy.”

“At heart, we’re still the same kids,” Reis allows, and that’s the ultimate ingredient in making his music successful: It’s genuine. And there is a wonder about it that cuts through any bombast and boasts.

There’s a small part of Reis, maybe, that still doesn’t believe he’s made an album that you can pick up in Bull Moose or buy from iTunes just like “real” rappers. Which means he’s made it for all the right reasons.

Out of this world

The digital delight of Space versus Speed

Since 2000, we’ve had the Popsicko, Rocktopus, As Fast As (three albums), Spencer and the School Spirit Mafia, and now Space versus Speed. All with Spencer Albee as principle songwriter and frontman. Seven full-length records [this was first released in late 2010].

It seems like a lot until you consider Eric Clapton was with the Yardbirds, the Bluesbreakers, Cream, Blind Faith (for my money the best classic rock album of all time), Delaney and Bonnie, Derek and the Dominoes, and then fronted a solo record all between 1963 and 1970. Makes Albee look downright focused.

I don’t give a shit if he has a different band name every other Friday. I’ve never been disappointed, and I still listen to at least a few songs off every record he’s ever made. Every band has had its signature sound, filtered through a Beatles-pop lens Albee loves to apply. The most recent School Spirit Mafia was almost folksy, with lots of acoustic guitars and backing harmonies. It felt very super ego. Rational. Space versus Speed might be the record that is the most Spencer. The id. He used to like to throw these spacey keyboard lines into Rustic tunes, or tracks that were basically fine with just normal guitar-bass-drums voicing with As Fast As, because, well, he’s a keyboard player. But this album is keyboard centric, as though he finally realized that he didn’t need to front this band with a guitar. It’s all spacey keyboards, and guitars that sound like spacey keyboards, and bass that sounds like spacey keyboard. It’s a digital celebration.

It’s down, dirty, and probably the most fun thing he’s every done, too. It all started with the “iRok” single back in August. It was though Albee impressed himself with the melody line that runs through it, like he fell in love with it. I’m glad he did. Coming seventh on this 11-song disc, it is the album’s heart. A blast. And you can’t even really tell Albee sings on it. Saiyid Brent’s rap is certainly the song’s identity. But it’s the energy that matters. It’s undeniable.

Albee’s got other help, too. Horn player from the Mafia Jamie Colpoys (Fogcutters Big Band) gets a writing credit on “iRok,” and she’s now part of the band. As is Nate Nadeau (Conifer) on drums, Neil Collins (Lincolnville, Twisted Roots, Eldemur Krimm) on bass, and Walt Craven (Goud’s Thumb, 6gig, Lost on Liftoff) on guitar. That’s some serious talent and experience.

All but Collins get songwriting credits on the second single from the album, “Tea and Cocaine,” which opens with a melody line that sounds like a “power-up” in a Mario video game, and Albee vocals so distorted and mirrored by a robot voice that you could again hardly know it was him. But the song structure and melody are all Albee. There are few who write a catchier chorus, and this one delivers in full. Which makes the contrast with the video game stuff all the more jarring, like an ice cube on the back of the neck on a summer day. Bracing, but good. A little bit exhilarating.

“Indispensable,” the chorus of which is repurposed for Spose’s “Into Spose,” was cowritten by the Lucid’s Dominic Lavoie, and is a bit psychedelic like that. The chorus is “Florida Sunshine” good, as is Tim Emery’s lead guitar bit between the last two choruses. Lights out.

“Set It Off” has a wicked na-na-na vocal line. Wicked.

There is a line of heaviness that Albee edges across every once in a while that sounds somewhat forced – “Red Line Cannibal,” “AC15” – but Albee is pushing the envelope and a songwriter isn’t trying hard enough if some things don’t work 100 percent of the time.

He comes full-circle by the finish, with the song most like his oeuvre, “By Land As By Sea,” a straight pop-rock tune infused with a tinge of melancholy and no co-writers: “I’ve failed them, as captain/ How could I let this happen?/ And now I’m living with this.”