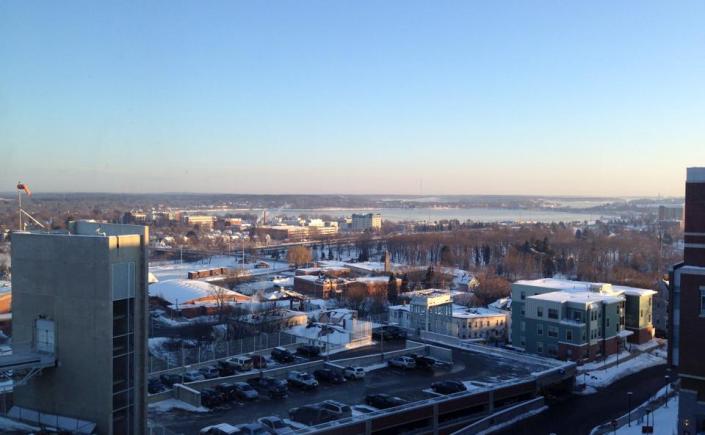 For fans of the Locals, here’s a disc just for you

Though its membership seems to be increasing, the group of people who really know local music — who have it in their regular rotation, in their car, and can talk knowledgeably about it — is fairly small. Perhaps regular readers of “The Beat Report” [my column in the Portland Phoenix at the time] make up a large portion of that group. So here’s a test (answers appear in “Sibilance,” linked off the music page [this refers to print – we didn’t bother to change it on the web page]) that might serve as an initiation requirement:

5. Name all the Spencer Albee-fronted bands.

8. Which Horror member was once a member of the hip-hop group kNOw Complex?

9. Which former Silos frontman died in an accident in 1993?

10. Name three bands with whom Neil Collins has played.

Okay, how’d you do? Did you pass? Anything above 60 percent and I’d be pretty impressed, even if #4 is a gimme. If you even thought hard about the answers, though, you’re going to be thrilled with a project, to be released March 1, that’s been organized by Mark Curdo, honcho of the brand-new Labor Day Records and a guy who’s been involved in Portland music since he worked as a DJ at the St. Joseph’s radio station WSJB in the mid-1990s.

Riffing off the Goud’s Thumb song title “Beautiful Local,” Curdo has createdBeautiful Locals, an album consisting exclusively of Portland bands covering songs by other Portland bands, both past and current. It’s inclusive, diverse, interesting, and, most importantly, makes for a great listen.

If you haven’t heard the back story yet, I’ll give you the capsule review. After some time in the music industry proper, and New Jersey (ick), Curdo returned to the Portland scene looking to do more than just manage bands, as he had done with bands like Rotors to Rust and Rocktopus. He wanted to work with lots of bands, so it made the most sense to start his own label.

But, he says, “I didn’t sit there and say, ‘I’m going to start blah, blah records.’ I was looking for a more honest way for me to start this venture.” Remember, he wanted to work with lots of bands.

“I’m a big fan of covers,” he says. “But I don’t like compilations. Most are crap. The ones that work are those with a very odd pairing of things. A soundtrack to a Wes Andersen movie or something. I thought that I could do something of a compilation of Portland bands, but I didn’t want them to just put out their songs. Anybody can do that.

“I just thought about these bands getting together and somehow bringing together what’s happened over the past 15 years specifically — which I think is where it’s been strongest — and really trying to tie it together, which I don’t think anybody’s really been able to do. So I thought, ‘How about Portland covering Portland?’ ”

Not surprisingly, “The ideas of who would do what started racing through my head and I thought this could be really cool.”

Curdo started out with a list of about 60 bands he saw as possibilities and then started narrowing the project down using the following criteria: “classic artists balanced with new stuff, bands that are just breaking through. To get young kids who are listening to ’CYY to find out about, say, Twisted Roots or Goud’s Thumb, and, vice versa, to get people who used to go to the State Theatre but don’t know about the Press or Eldemur Krimm. I like turning people on to music and this is a way to do that.”

Then it was just a matter of making tough decisions about whom he would approach and whom he wouldn’t. “That was the toughest part,” he says. “It wasn’t the biggest bands. Sometimes, it was just some bands I knew better. Some bands I felt had to be a part of it; it couldn’t be complete without them. And I wanted to take some chances with bands who’ve been working their asses off and deserved a shot with something cool.”

The end result is definitely weighted toward the musicians you might find hanging out at the Big Easy on a Saturday night, and it could be said that the hip-hop, punk, and roots scenes are under-represented, but it’s not like Curdo is working with public money here. It makes sense that the project is also a reflection of his own musical tastes and the bands that began his own love of local music in the first place.

Further, by taking such a tight-knit group of musicians and putting them on to a project like this, Locals winds up being Greetings From Area Code 207 to the next level, not only showing off the incredible talent we have residing here in Portland, but also allowing that talent to pay homage to the scene itself, reveling in the minutiae and details that only people who’ve been directly involved would appreciate.

That’s why, though it’s a collection of covers, the compilation contains very few instantly recognizable songs for the casual fan. Few of these songs have been on the radio, despite the fact that many local songs get play on our commercial stations. Few of these songs are “singles.” Instead, the bands on the album have chosen their favorite tunes, those songs that inspired them and got them amped up to play their own songs, deep cuts from albums that personally affected them.

This also leads to one of the album’s few problems, in that many of the bands seem to so respect the bands they’re covering that they don’t fully make the songs their own. Sometimes, the songs don’t sound that different from the original version.

“The toughest thing [for the bands] was who to do,” says Curdo. “I didn’t want to dictate any of that. The fun of it was them choosing the songs. I think I could have matched bands and songs really well, but I wanted the bands to do that.”

For instance, “Twisted Roots were really psyched to be involved. They were very pro Darien [Brahms]. That pushed me over the top to get hold of Darien. Turned out both of them wanted to cover Manny Verzosa, so the two of them had it out and talked it over.” In the end, the Roots took Verzosa’s “Tuesday,” and Brahms had the band back her up for Mark Farrington’s Cattle Call tune “Take Control.” That’s what’s so right about this project.

Verzosa’s incredibly respected by the local community (note his two songs on the GFAC discs), but little known by the general public. Brahms told me a story once about being on tour with Verzosa for her 21st birthday, where he pumped her full of booze like any good older brother would, so she wound up playing hungover as hell for the little geniuses of Simon’s Rock College. That’s the way I’ve come to see Verzosa in total, as a kind of older brother to the Portland music scene. And Twisted Roots strike me as his metaphorical high-school buddies, those kids who came over all the time to eat out of the fridge and who you wanted to impress.

Their “Tuesday,” which they only ever had a bathroom demo of, comes with a spare opening that gets to Verzosa’s roots with just a backing rhythm guitar and faraway drums, but then launches in to the full Twisted Roots, anthem-rock treatment, full of Giordano’s soaring vocals and blasting guitars.

And they get Brahms a bit out of her shell, too (not that she’s really in one). Her opening to “Take Control” wouldn’t sound out of place on her last album, but once the coda takes over, with Brahms and Giordano trading off with plaintive “take me home”s, she really seems like she’s ready to kick some ass.

Then there’s Pigboat doing a crunching “Epiphany,” a Rotors to Rust song that was never even released on record; Tony McNaboe doing the Troubles’ “Heartfull of Heartache,” a deep cut off the classic-rock band’s Here We Go Again, with full R&B arrangement; and Adam Flaherty taking his ultra-indie voice to Lincolnville’s “Kill the Show,” which always played second fiddle to their smash “Heavenly Calm.” Even hardcore fans are unlikely to recognize the Horror stretching out Eggbot’s concise pop gem “Heaven Needs Babies, Too” past eight minutes with psychotic abandon. Eggbot has yet to release it himself.

Not that everything’s obscure here. It’s thrilling to hear the album open with Dave Gutter, Portland’s signature frontman, taking on 6gig’s “Hit the Ground,” possibly the biggest rock radio single to ever come out of Maine. Paranoid Social Club amp up the rhythm and throw in some explosive samples. Tony McNaboe’s WCLZ smash “Destination” is here, too, recorded live by the Pete Kilpatrick Supergroup, a direct opposite to the studio construction of McNaboe’s solo project, where he played all the instruments.

It’s fitting, too, that the now-defunct Even All Out’s take on the album’s namesake is the best track. It’s central to the disc, coming in at track #10, and is pure radio rock. Billy Libby demonstrates the pipes that thrust Even All Out into the public consciousness in the first place throughout the opening verse before opening up into an expansive chorus, “and it seems like you forgot, and I knew you would.” Yes, most us have pretty much forgotten about Goud’s Thumb, haven’t we? Here’s a great reason to remember them.

King Memphis, however, seem to be having the most fun of the lot. Normally confined to the genre-specific and exacting world of rockabilly, the Memphis boys really play with Eldemur Krimm’s rocking “Chopper.” They pick out the opening “Now this here’s a story . . .,” guitar, bass, and drums locked into a little walk, then blow your doors off with some serious surf and Robbins vamping it up all over the place, especially on the chorus burlesque. Then follows a ripping guitar break (what would a King Memphis song be without one?) nearly a full minute in length, a final verse, and then a finishing voiceover, as though the band were wishing a crowd good night.

“We hope you had a good time,” says Robbins. Then he asks drummer Gary Burton, “Gary, did you enjoy yourself?” He screams. Then, “How bout you Chris, did you have a good time yourself?” Chris Day screams, “Woooo.”

Yeah, the musicians on Beautiful Locals are pretty clearly having a good time. How else can you explain 16 bands getting together to record 16 tracks in about three months’ time (mostly with Jim Begley over at the Studio) for a project they really have no vested interest in? That pure love of the project tangibly carries through to the music, and that’s something you just have to hear.